We have been wishing to be able to bring Kaelyn out of the Singapore borders. But we have not done so out of fear of medical or equipment issues cropping up when we are more than 1 hour drive away from medical help. In addition, her equipments and requirement to have oxygen tanks on standby with her probably makes customs clearance difficult.

In November, we were given the opportunity to do so by Club Rainbow as they were organising a 4 day 3 night cruise, together with Rare Diease Society Singapore (RDSS) for both their members, on board Royal Caribbean’s Mariner of the Sea.

It is really a big day out for Kaelyn as it was her first ever trip out of Singapore, and also her logistics require ‘big’ effort.
These are the bags for 3 adults and 1 Kid, with no winter clothing and excluding the equipment on her buggy. 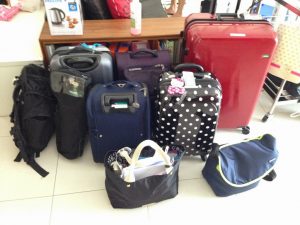 We were kiasu (scared to lose) and kiasee (scared to die). We bought backups for her critical machines. These made up half of our baggages.

Tagging along with Club Rainbow and RDSS probably made clearing the customs easier as we were going through as a contingent. The customs were probably expecting what we have on hand.
Also Club Rainbow have a medical team on stand by all the time during the cruise. We know we have some support if there are issues.

I am glad that we were able to make this trip. Kaelyn pretty much enjoyed the time on the ship even though activities for her were  limited.

She loved the christmas tree on display. She tries to sing some christmas songs whenever she goes past the tree. 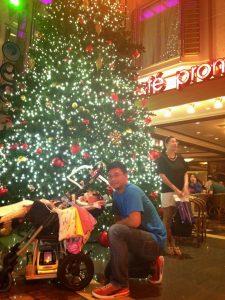 She also shook hands and posed for pictures with puss in boots.

Not a very keen fan of the outdoors 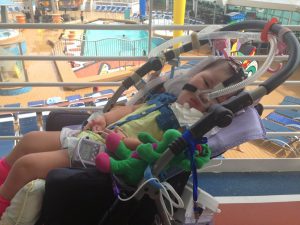 This trip also brought families with kids having rare life threatening conditions together. This is Danielle, who is about 4 years older than Kaelyn. Same as Kaelyn she has SMA. They were just sort of hanging out and watching the cartoons together. K wanted to touch and stroke Dan’s hair. and Dan didn’t seem to mind K at all.

Just kids enjoying the company of other kids. 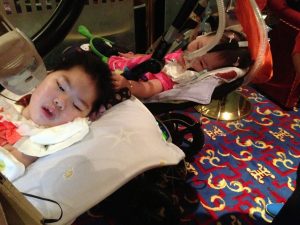 How did we know that she didn’t want to leave the ship and holiday behind? This is her face when we disembarked to go home and told her holiday’s over.