3rd day of her hospitalization today. Yes. k was re-admitted on the Tuesday afternoon. No sign of anything coming. Just coughs and more secretion over the past 2 day and a slight fever coming in the previous day.

Then suddenly she was burning at 40 degree, losing consciousness and life in her eyes. No stroller, no packed bags. We rushed to the hospital with my helper carrying her while mummy standby with the suction machine in the back seat. 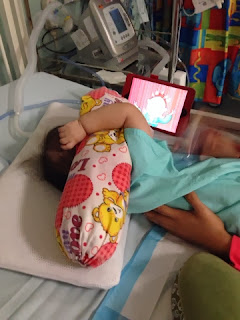 She settled down, fell asleep en route to hospital. She stabilized when at the A&E. Everything was ok after that. Doctors was considering to send us home soon.  But we said no as she has not gone back to her baseline numbers.
Then this evening she suddenly desat after she seem to have secretion in her airway. Her SPO2 dropped to 17. We quickly suction and called in the nurses and doctors and started to bag her. She picked up but soon dropped again. Her heart beat was also dropping. Her eyes were lifeless with a vacant stare, closing and looked like giving up.
We let the nurses do their thing. We did nothing except shouting her name, and ask her to remember and do our breath in breath out thing. It was a fight for her life. All we could do was keep calling out to her to keep her awake. We couldn’t let her be taken away just like that.
We didn’t keep time but she stabilized. She had X-ray done revealing a collapsed upper lobe on her lung. A physio was called in to try to do a thorough chest percussion therapy for her.
We need to be better in managing her secretions especially with her positioning. But it’s a dilemma really. She is comfortable lying down flat and let her secretions drool out from her mouth. But it also seems to be make sense to prop her up so as to minimize secretions to flow to her airway.