It was a busy 3 days for Little K. We had an outing with MDAS on Saturday. Now Monday, was a trip to the fairly new Marine Life Park.

Why make K so busy? Well, one was the off day that daddy and mummy could take from work. The other was that as she is scheduled to have the PEG procedure done at end of October. It will probably take some time for K to settle down after the procedure. So we try to bring her out when she still can.
A family photo taken before going in. 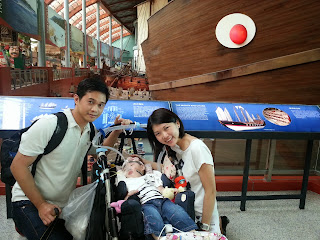 This is her when she first went into what i call the viewing tubes. 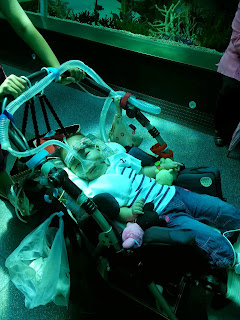 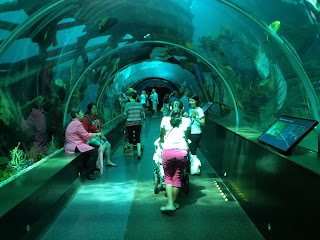 After about an hour of touring the place, she pretty much fell asleep. It was just nice we stopped at the Ocean Dome. We let K catch up on her feeding as well so that she won’t miss too much of her feeding. Us…we just kick back, rest out legs and gorge on the turkey sandwiches and enjoy the large screen aquarium in front of us.

After her half time nap we continued with the remaining length of the marine life park. This time round whenever we push her and stop in front of a fish tank, she was like gosh not another fish tank. I think the small tanks pretty much seems the same after a while :p But all in all I think K pretty much enjoyed seeing the fishes, just like any other kid would.